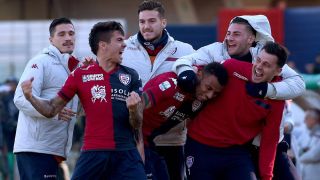 Cagliari earned promotion back to the Serie A after confirming a top-two finish with a 3-0 win over Bari on Friday.

Cagliari, who were relegated from Italy's top-tier competition in 2014-15, needed just one season to recapture promotion.

Joao Pedro opened the scoring in the 24th minute at the Stadio Comunale San Nicola, silencing the home supporters with a well-taken finish from outside the area.

Fellow Brazilian Diego Farias doubled their advantage four minutes into the second half, before substitute Alberto Cerri confirmed the result with an emphatic finish three minutes from time.

The win saw Cagliari move 11 points ahead of third-place Trapani, with three games left in their season.

Cagliari can also claim the Serie B title if they win both of their remaining games, and league-leaders Crotone fail to win two of their three fixtures left to play.