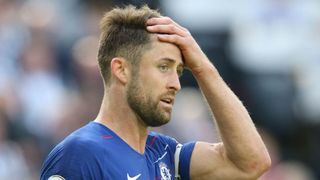 Gary Cahill reminded his team-mates that "hard work is a basic of the game" after Chelsea's Premier League campaign ended with a whimper.

The Blues failed to book a place in next season's Champions League as they went down 3-0 at Newcastle United, though Liverpool's victory over Brighton and Hove Albion meant a top-four finish would not have been possible regardless of the result on Tyneside.

Dwight Gayle's first-half header and two goals in the space of four minutes from Ayoze Perez led Rafael Benitez's team to a deserved triumph against their lacklustre opponents.

Cahill suggested Chelsea were focused on next weekend's FA Cup final against Manchester United, but would be irritated if any members of the team had taken the clash at St James' Park lightly.

"I'd certainly like to think people gave their all today, and to not do so would be extremely disappointing," Cahill was quoted as saying by BBC Sport.

"I don't care if you're a top-class player or a basic player, hard work is just a basic of the game.

"It looked to me like everyone had one eye on the cup final which is very dangerous and we were lucky the game was kind of irrelevant. Had the Champions League truly been on the line it would have been very difficult to take.

"We came here to give a performance and take three points. Prior to the Huddersfield game [a 1-1 draw in midweek] we were in good form but that's not an excuse.

"We have got a massive week now to prepare for a cup final."