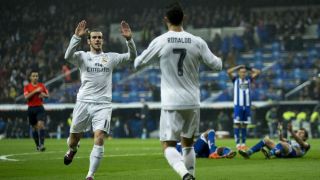 Former Real Madrid president Ramon Calderon believes Gareth Bale will become a great player for the club, but insists there is no substitute for Cristiano Ronaldo.

Bale, sidelined with a calf injury sustained in the 5-1 win over Sporting Gijon on January 17, has scored 13 goals in 15 Liga appearances this season and looks on course for his most prolific campaign since arriving from Tottenham in 2013.

Nine of those strikes have come in the Welshman's last five top-flight outings, and Calderon thinks such form ensures he has a bright future at the Santiago Bernabeu.

He told Omnisport: "[Bale] is exceptional and an awesome player who can have a long run here at Real Madrid. The injuries are not good… but he is growing.

"I think Real Madrid made a great decision and if he plays like he is doing right now he will be very important for the club.

"Bale is an important player in many senses. He is a player who came with fame but he is going further here.

"He is already a striker and he scores many goals, which are very important for the team."

Despite Bale's recent upturn in form, he still trails Ronaldo in the Liga scoring charts by three goals.

And, regardless of how important Calderon feels the former Tottenham man can become, he does not think anyone can emulate the Portuguese forward.

"It's going to be difficult to have a player like Cristiano Ronaldo, who scores 60 goals," he added.

"[It's] very difficult to find a key player as much as Ronaldo is on the pitch, so I just hope he is not leaving Real Madrid. I don't see a substitute. There are many good players but nobody is like him."