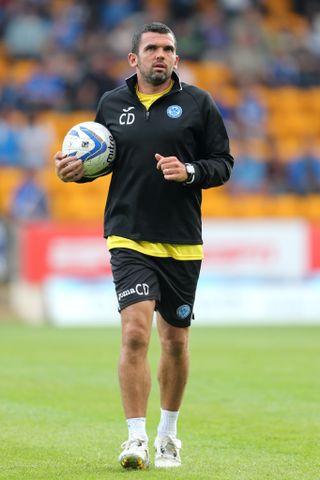 St Johnstone are in “advanced” negotiations with Callum Davidson to return to the club as manager.

The Millwall assistant boss is set to be appointed as Saints begin their pre-season training schedule.

A Saints statement read: “The club can confirm that an agreement has been reached with Millwall FC and we have been granted permission to discuss personal terms with Callum Davidson regarding the vacant managerial post at McDiarmid Park.

“Discussions with Callum are now at an advanced stage with a view to the 43-year-old taking over from current caretaker boss Alec Cleland.”

🔵⚪️| The Club can this evening confirm that an agreement has been reached with @MillwallFC and we have been granted permission to discuss personal terms with Callum Davidson regarding the vacant managerial post at McDiarmid Park.— St. Johnstone FC (@StJohnstone) June 17, 2020

Davidson is now poised to succeed Tommy Wright two years after leaving his role as the Northern Irishman’s assistant.

The former Scotland left-back departed for a job on Gary Rowett’s coaching staff at Stoke and again teamed up with his former Leicester team-mate in south London.

Davidson started and finished his playing career at McDiarmid Park, turning out for Blackburn, Leicester and Preston in the intervening period having left for Ewood Park in a £1.75million move which remains Saints’ highest transfer fee.

#Millwall can confirm that the club's assistant boss, Callum Davidson, has been given permission to speak to @StJohnstone about their vacant managerial position…— Millwall FC (@MillwallFC) June 17, 2020

Wright left St Johnstone in May after seven successful seasons in charge during which the club won their first major trophy, the Scottish Cup, and regularly finished in the top six in Scotland.

Millwall have already announced that Adam Barrett will become their assistant manager on an interim basis with under-23s boss Kevin Nugent also joining the first-team coaching staff for the rest of the season.

The Sky Bet Championship club said: “Everyone at the club would like to thank Callum for his superb efforts throughout his time at Millwall and wish him well for the future.”