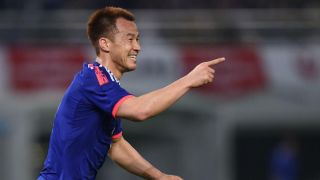 Shinji Okazaki spared his own blushes by scoring just four minutes after missing a penalty in Japan's unconvincing 2-0 victory over Cambodia in Phnom Penh.

Japan coach Vahid Halilhodzic wanted goals aplenty against the whipping boys of Group E in the Asian qualifying section for the World Cup, but a combination of apparent complacency from his side and a spirited display from Cambodia meant the teams went in at half-time level.

Okazaki was presented with a perfect opportunity to open the scoring just two minutes after the restart when Shinji Kagawa was rashly brought down inside the area, but the Japan skipper fluffed his lines from the spot.

However, Okazaki made amends shortly after, when he rose highest to bravely head a superb cross past Cambodia goalkeeper Um Sereyroth.

Keisuke Honda nodded in Japan's second in the last minute, but for minnows Cambodia - who had conceded 19 goals in six qualifying defeats before Tuesday's match - a 2-0 loss can be deemed creditable.

Halilhodzic's team, meanwhile, remain top of the pool and are now all-but certain of a top-two place after Syria beat Singapore in their second-versus-third clash.

Japan unsurprisingly began the match on the front foot, although they had to wait until the 17th minute for their first attempt on goal, when Borussia Dortmund star Kagawa drifted in from the left and dragged a shot wide from 18 yards.

Cambodia were displaying impressive defensive organisation, but they could count themselves lucky to be level at half-time as Hiroki Fujiharu crashed close-range volley off the post on the stroke of the interval.

The hosts' resolve looked set to be broken almost immediately after the restart when Nen Sothearath clumsily felled Kagawa in the box, but keeper Sereyroth came to his team-mate's rescue with an excellent save from Okazaki's spot-kick.

But Okazaki was not to be denied, as he powered a header past Sereyroth in the 51st minute.

Honda then sealed the points late on to earn Japan a scrappy, yet valuable, win that moves them closer to a spot at Russia 2018.