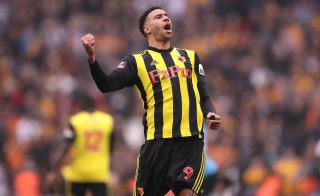 Watford midfielder Etienne Capoue admits he does not watch football in his spare time and would even swerve Saturday’s FA Cup final if the Hornets were not involved.

The 30-year-old is more likely to be found watching basketball or learning dance moves with his three young children than tuning into the latest football action.

Having started life in the Premier League with an unspectacular two-year stint at Tottenham, Capoue will line up for Javi Gracia’s side against Manchester City at Wembley having just been crowned Watford’s player of the year by the club’s supporters.

But he insists he would not be sat at home watching if the FA Cup final was contested by two other teams.

“I don’t watch football, I didn’t know about the FA Cup even when I was playing in France,” he said.

Asked if he would watch anyone else compete in the final, he replied: “No way! No chance.

“I would watch the basketball. I watch a lot of it. I follow the (Los Angeles) Lakers but they did not make the play-offs – but I shall still watch every play-off.

“I love my job and what I am doing every day. I love football – but there is not only football in life.”

On a rare Saturday off, Capoue would rather spend time with his young family, even if it means watching children’s television rather than Match of the Day.

“(I would) spend a normal day with my wife and kids and try to learn something outside football,” he said when asked what he does if he has a weekend without playing for Watford.

“I don’t think football will follow me after my career so it is good to understand some other things in my life. I try to do a lot of activities.

“I don’t know what I will do after football, but if I am too focus on football it would not be smart. It is good to get a lot of information about other aspects of life.

“My life changed when I got my family. You have different views on the world. It did not change my football, but it changed me life. I have had to learn the actions to Baby Shark! But I love it – I enjoy life.

“They will be at Wembley. I hope they can join me in parading the trophy – although it might be too heavy for them.”

Despite not watching a Manchester City game in its entirety this season, Capoue believes Watford’s cup final opponents are the most impressive side he has seen since moving to England in 2013.

“The best team ever in my six years in England,” he said of Pep Guardiola’s side.

“Six years I have played against them and this year was the best team ever.

“Nobody expects us to win so we are working from our side very quietly and we are going to give it 100 per cent.”