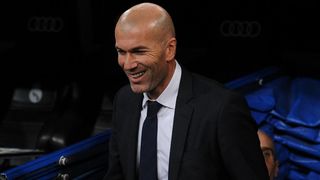 Zidane earned almost mythical status at the Santiago Bernabeu in five seasons as a player at Madrid and has spent the last three years working at the club as a coach - first as assistant to Carlo Ancelotti and then as Real Madrid Castilla coach.

The Frenchman was promoted to first-team coach last month following the departure of Rafael Benitez.

Capello was one of Zidane's managers at Madrid - leading the club to a La Liga crown in 2007 - and the Italian coach believes the World Cup winner has the necessary skillset to achieve big things at Madrid.

"He did very well with the Castilla, but he has the charisma to lead the Madrid to the top of the table and above all to win the Champions League," Capello told Sky Italia.

"When the tenth [Champions League title] arrived, Zidane worked with Ancelotti, who was a great teacher for him.

"Carlo is one of the best in the world and [Zidane] learned a lot, like how to manage well known players like Cristiano [Ronaldo] and [Karim] Benzema and make them always feel the focus of the project."

Capello said he felt Zidane's stature as a player - something his predecessor Benitez lacked - would hold him in good stead among the dressing room despite his lack of experience as a coach.

"With Benitez, the team had no confidence," Capello said.

"He introduced things abruptly and it was not accepted by the staff, especially because he was not a great player."

Zidane won his first game in charge of Madrid, beating Deportivo La Coruna 5-0 and will look to build on that against Sporting Gijon on Sunday.