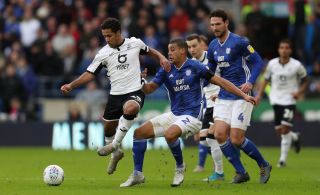 Cardiff and Swansea shared the south Wales derby honours in a 0-0 draw that will not live long in the memory.

Both sides struck the woodwork – Callum Paterson for Cardiff and Bersant Celina for Swansea – but defences were largely on top and there was a lack of quality overall.

It is a curious statistic in this contest that neither side has ever completed the league double in the 108-year history of the fixture.

Swansea had the opportunity to do so this time after their October win at the Liberty Stadium, but they will probably be more satisfied with the outcome.

The draw takes them level in the Sky Bet Championship with sixth-placed Sheffield Wednesday, while Cardiff are four points further back.

Swansea handed an instant debut to Rhian Brewster after the exciting Liverpool teenager joined on loan in midweek.

Brewster had featured for Liverpool in the FA Cup Merseyside derby victory over Everton seven days earlier and was given a central striking role.

The 19-year-old was given a central striking role and was eager to make a swift impression, so much that he clattered into Lee Tomlin after 10 minutes to collect a yellow card.

Both sides could have been ahead by that point, Robert Glatzel heading wide for Cardiff and Wayne Routledge sending his shot skywards after Curtis Nelson had failed to cut out Connor Roberts’ long throw.

Cardiff were keen to get crosses into the box as Swansea were without the commanding presence of Mike Van Der Hoorn.

Freddie Woodman was perfectly placed to stop headers from Glatzel and Nelson, but the on-loan Newcastle goalkeeper was generally well protected by young centre-backs Ben Cabango and Ben Wilmot.

Cabango intervened to prevent Glatzel tapping home from close range, but it was Swansea who almost took the lead after 28 minutes.

Celina had just curled wide from wide on the right when Swansea launched a rapid counter-attack and he struck a post from an identical position.

Junior Hoilett was cautioned for a foul on Roberts and tempers threatened to boil over as Glatzel and Cabango clashed and both sets of players squared up to each other.

Swansea started the second half in confident fashion, but Tomlin drove wide from the angle before Hoilett fired wide from 20 yards.

Brewster turned smartly on the edge of the area but his skewed shot summed up his growing frustration.

The England Under-17 World Cup winner found space again to get a shot off from the edge of the penalty area but again the effort was dragged wide.

The contest was becoming increasingly scrappy but Cardiff were inches away from taking the lead after 76 minutes when their two substitutes coming.

Josh Murphy sent over a cross to the far post which Paterson directed against the crossbar from a few feet away – and that was the last big chance for either side to win it.