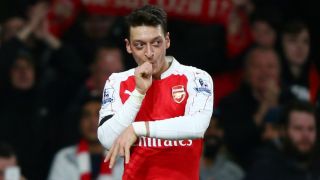 Writing in his weekly Daily Mail column, Carragher said Ozil's numbers were impressive, but without medals to show for them it would be hard to justify comparisons with Bergkamp.

"As we head into 2016, [Ozil] is the main reason Arsenal are leading the way and to have 16 assists already is astonishing. Nobody in Premier League history has got near that total at this stage," Carragher wrote.

"It has led some people to say that Ozil is now at the level of Dennis Bergkamp. Others have suggested he is surpassing Bergkamp because, even at his best, the Dutchman never produced that many assists over the course of one season.

"As it stands, though, it is nonsense to use statistics to try to compare Ozil and Bergkamp. The reason is this: Bergkamp is immortalised in bronze outside the Emirates Stadium because, aside from all the medals he won, he helped bring fantasy football to north London."

"His style had substance."

Carragher said if Ozil could keep up his form and help Arsenal win a first Premier League title since 2004, legendary status would be justified.

"If Ozil continues to sparkle when it matters in the next 19 fixtures — there is a feeling in Germany that he doesn't always produce in big matches — and inspires Wenger's squad to their first Premier League title since 2004, it would make him a legend in the eyes of Arsenal fans," Carragher continued.

"Until then, the Bergkamp comparisons must wait. Ozil must take Arsenal to the title if he wants to get there."