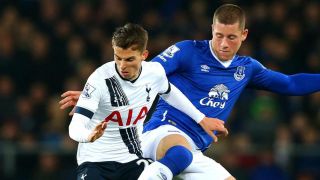 Tottenham midfielder Tom Carroll believes games against top-four rivals, such as the club's next Premier League fixture against Leicester City, are must-wins on the road to Champions League qualification.

Carroll, 23, has enjoyed a good run in the first team after several loan spells in the Championship and most recently with Swansea City in the Premier League.

Tottenham drew 1-1 at Goodison Park against Everton on Sunday.

"If we'd have got the first goal it would have been a lot more comfortable," Carroll said.

"Obviously when we equalised we felt confident but as the game went on it got a bit stretched and we went chasing the three points but it just wasn’t to be.

"Personally, it was nice to get the 90 minutes and be trusted to do that – hopefully I repaid that trust. As a group we were good and on another day I feel we would have got all three points."

Tottenham now face a double header against Leicester, having drawn them in the FA Cup third round ahead of the resumption of Premier League duties

"We’ve got two tough games against Leicester coming up – they’ve been doing very well in the league so they’ll be two good tests but we’re looking forward to it," Carroll said.

"Games against the teams around us are the key ones and if we want to be up there at the end of the season then they are the games where we need to get maximum points. They should be two good games."

Tottenham sit in fourth position in the league, four points behind second-placed Leicester.