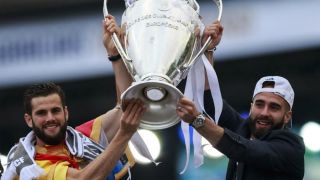 Dani Carvajal insists Real Madrid are aiming to win every trophy on offer this season as they prepare for their first full campaign under Zinedine Zidane.

Zidane, who took over from Rafael Benitez in January, guided the club to a record 11th European title as they overcame city rivals Atletico in the Champions League final.

The win meant Real will compete in the European Super Cup and Club World Cup later this year, with five trophies on offer for next season.

And Carvajal, who missed out on Spain's Euro 2016 campaign with a leg muscle injury, says Madrid are aiming to win it all in 2016-17.

"I'm really looking forward to starting the season and I'm already training alone so that I can begin well," the defender told Real Madrid TV.

"Expectations are sky high. Straight away we've got the European Super Cup and we're going to prepare well to win the first title.

"We want to compete for everything, La Liga, the Copa del Rey, Champions League and the Club World Cup.

"We're aiming for everything, but we must keep our feet on the ground because it's very difficult and it will take a lot to achieve it."

As for the Euros, Carvajal is hoping one of his Madrid team-mates can win it, with Cristiano Ronaldo and Gareth Bale set to do battle in the semi-finals as Portugal meet Wales.

"I hope that one of my team-mates can win the European Championships," he said.

"We know that at least one madridista will be in the final because of the match between Portugal and Wales.

"I hope that they enjoy it because the experience of the Euros should be very nice."