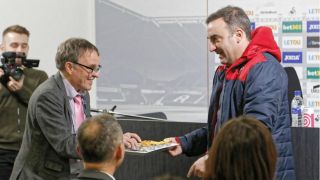 Carlos Carvalhal has developed a reputation for his poetic turns of phrase after being appointed Paul Clement's successor at Swansea City.

And the Portuguese coach showed a further string to his bow as he delivered sweet treats to the awaiting press pack at a news conference on Thursday.

And with Swansea welcoming Burnley to the Liberty Stadium on Saturday, Carvalhal was upbeat about his side's chances of avoiding relegation from the Premier League.

"We were last when I arrived, five points from safety I think," Carvalhal said. "Now we are in a better position.

"We have our heads above the water and we are breathing fresh air, but the sharks are still around us.

"They will push us back down if we do not keep going, and we have to make sure that does not happen."

Pastéis de nata! Carlos brings a little bit of home to the press pack ahead of today’s press conference… February 8, 2018

Injuries have made life harder for Carvalhal, who will be without Wilfried Bony and Leroy Fer for the rest of the season after both players required surgery.

And there was further bad news for Swansea - out of the relegation zone on goal difference - as club captain Angel Rangel joined the injury list.

"It is possible Angel will need surgery," Carvalhal said. "He has an abductor problem, as does Leon [Britton].

"Leon will have an injection and he will soon be training with us, but Angel will be longer."

Swansea - who thrashed Notts County 8-1 in an FA Cup replay to set a Liberty Stadium record on Tuesday - have beaten Liverpool and Arsenal in their last two Premier League home games to boost their survival hopes.