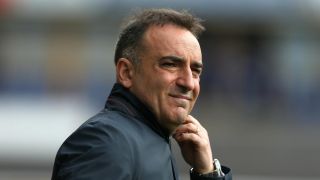 Sheffield Wednesday have announced Carlos Carvalhal will stay in charge of the club for the 2017-18 season, despite suffering Championship play-off heartbreak for the second year in a row.

Wednesday were knocked out on penalties by Huddersfield Town after a 1-1 aggregate draw in their semi-final, with David Wagner's men going on to play Reading in Monday's final at Wembley.

The south Yorkshire outfit made it to the play-off final last season but were beaten 1-0 by Hull City thanks to a Mo Diame screamer.

Wednesday said Carvalhal, who had been linked with a return to his homeland to take charge of Porto, has signed a new contract to extend his stay at the club, but no details about the terms of the agreement were given.

Carlos Carvalhal has extended his stay as head coach at HillsboroughMay 23, 2017

"Carlos and his backroom staff - who have also extended their S6 contracts - will regroup for the 2017-18 campaign, which begins with pre-season in July," read the club's statement.