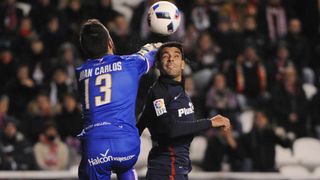 Augusto Fernandez is in line to face his former club as Liga leaders Atletico Madrid travel to Celta Vigo on Sunday.

The 29-year-old midfielder completed a move to the 2013-14 champions on January 1 and is poised to make his league debut for the club on his old stomping ground of Balaidos.

Fernandez made his first appearance for Atletico in the Copa del Rey draw with Rayo Vallecano and head coach Diego Simeone spoke afterwards about he hopes to see "lots of improvement" over the remainder of the season.

Striker Luciano Vietto knows the difficulty of acclimatising quickly to life at the Vicente Calderon and says the squad must do their utmost to help Fernandez and fellow January arrival Matias Kranevitter adjust as soon as possible.

"They are two players who have just arrived and it's always difficult when you come to a new team where there is a lot of internal competition," he said.

"We'll try to get them engaged quickly."

Simeone's side take a daunting recent run of form to Balaidos, having lost just once on the road in their last six league games, while Celta are nursing back-to-back Liga defeats to Malaga and Athletic Bilbao.

Eduardo Berizzo's side picked up a morale-boosting 3-0 win in the Copa del Rey against Cadiz, though, and striker John Guidetti - who scored twice in that victory - is determined to continue his form to kickstart their 2016.

"I want the fans to know that they have yet to see the best version of me. I still have plenty to give," he said.

"It took me a while to adapt to Spanish football but I'm getting there. I hope to do more in the second half of the season."

Sunday's game remains under threat due to the weather conditions in Galicia, with severe rain causing floods in the city that prompted Celta to close their club shop this week.

Should the game go ahead, Celta are expected to be without Nolito (hamstring) and Andreu Fontas (Achilles), who are continuing to work on recovering full fitness.

Atletico are still without Tiago (broken leg), but boast an otherwise clean bill of health.

- Celta have won just one of their last six league games against Atletico Madrid (D1 L4) - the last time they met in February 2015 (2-0).
- Thomas has been involved in two goals in the last two La Liga matchdays for the first time in La Liga (one goal and one assist).
- Atletico Madrid (7) and Celta (6) are two of the three sides in La Liga this season with the most points won in the last 10 minutes of games.
- Celta have conceded five goals to opposition defenders in this La Liga season; a joint-high alongside Rayo Vallecano.
- Celta have been shown the most yellow cards for dissent in La Liga this season (14).