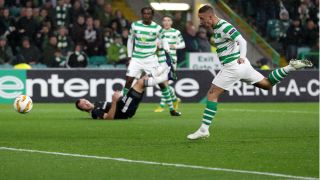 Leigh Griffiths proved the hero for Celtic as he came on from the bench to secure a 1-0 victory over Rosenborg in Europa League Group B.

Strong winds in Scotland disrupted Rosenborg's preparations for Thursday's clash, but the Norwegian champions - who lost to the Hoops in Champions League qualification - looked to have weathered the Celtic storm to come away from Glasgow with a point.

But Rosenborg's resolve was finally broken in the 87th minute when Griffiths stole in unmarked to head home from Dedryck Boyata's flick-on.

Issam Jebali wanted a penalty in the 15th minute when former Rosenborg man Mikael Lustig flung out a leg, but referee Pawel Gil rightly booked the visiting winger for simulation.

Tom Rogic then put Edouard through for Celtic's first chance, but the youngster lashed over from 18 yards.

Edouard went closer on the stroke of half-time, Hansen doing brilliantly to parry the striker's effort onto the woodwork after initially denying Rogic.

Hansen would have been beaten in the 62nd minute, but Sinclair somehow skewed wide of a gaping goal before Johnston blazed over from close range.

Griffiths wasted little time in showing his fellow substitutes how it was done, however, capitalising on Rosenborg's lapse in concentration to nod past Hansen and secure the spoils.