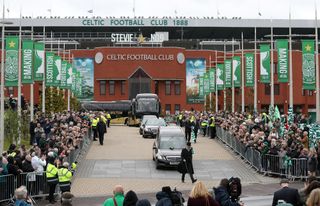 Jim Craig spoke of “a difficult week” for the Celtic family before the funeral of fellow Lisbon Lion Stevie Chalmers, who scored the most important goal in the club’s history.

Craig arrived ahead of a funeral mass at St Mary’s Church in Calton, where Celtic Football Club was first established during a meeting in 1887.

Chalmers , who netted the winner in the 1967 European Cup final against Inter Milan, died aged 83 last week, days after Lisbon Lions captain Billy McNeill.  Both had been suffering from dementia in recent years.

Today, we say farewell to a #CelticFC legend.— Celtic Football Club (@CelticFC) May 8, 2019

Craig said: “It has been a difficult week to lose another team-mate. Stevie was a very popular guy with everybody, fans and players alike, and at this time our thoughts are with Sadie and the family.

“We hope the public in general will remember him greatly as they will with that goal in Lisbon.

“First and foremost, he was a nice guy,  great fun to be with and we all enjoyed his company. He worked hard for Celtic, both as a player and later in his job there as well.”

Celtic chief executive Peter Lawwell, chairman Ian Bankier and other members of the Parkhead board were also in attendance.

They were joined by interim boss Neil Lennon and the Celtic squad.

McCloy said: “He was a great player, one of those like a Duracell battery – he kept on running all day. He was also a great team man. More importantly, he was a lovely man, we played a lot of golf together and he beat me at that, too.”