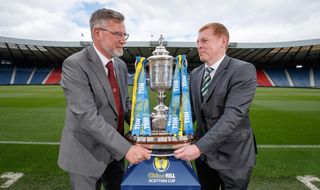 Neil Lennon has warned Celtic not to get sucked in by the triple treble hype as they prepare for their final push.

The Ladbrokes Premiership and Betfred Cup champions stand on the brink of completing a third domestic clean sweep in a row ahead of Saturday’s William Hill Scottish Cup final with Hearts.

But Lennon is worried his team could let their place in history slip by taking their eye off the ball.

He said: “Hearts are a very difficult obstacle for us to overcome so there’s no point me sitting here telling you how I’m going to feel when we win the cup.

“That will hopefully all come at half past five on Saturday.

“In the meantime, I’m just wary of everyone talking about treble trebles and bus parades.

“We’ve got to play the game and not the occasion. That’s the message we’ll be hammering into the players over the next two days.

“I’ve played the occasion and not the game when I was younger at Crewe in a play-off final at Wembley. The game passed me by completely because I got embroiled in all the build-up and the hype. It was a lesson learned.

“We have a very motivated Hearts team and for some of their players it will be their first cup final. They may never get the opportunity to win it again so they will be very hungry too.”

Jambos boss Craig Levein knows his side are massive underdogs to beat their all-conquering Parkhead rivals.

However, he believes they have one huge effort left in the tank after a gruelling season.

He took his squad to St Andrews this week in a bid to build in their minds the sense of occasion ahead of running out at Hampden.

Lennon, on the other hand, opted to keep his team at their usual Lennoxtown base as he guarded against the threat of an overblown build-up for what may end up being the final game for many in green and white.

“We’ve tried to keep it as normal as possible and calm,” revealed the Northern Irishman. “Treat it like another game.

“I think it’s dangerous to hype the games up and make it out to be something it’s not.

“There is loads of hype surrounding the game anyway but we can’t take any notice. We have to be professional.

“There’s been a good edge to training this week. We reminded them of their responsibilities this week about not being on holiday mode.

“I know that for some of them it may be their last appearance but they can’t get caught up in the emotion of that either. They’ve got a job to do and a trophy to win.

“The whole focus has to be on that and not the noise surrounding anything else.”

That noise also includes speculation over Lennon’s future as he heads into the last game of his caretaker stint.

But the ex-Hibernian boss stressed: “It’s nothing to do with my future. This game is about the players and what they can achieve.”

While Lennon is looking to lift his seventh trophy in two spells as Celtic boss, Levein is hoping to end his 38-year wait for a first major honour as either a player or manager.

Lennon admits he is amazed the former Scotland boss has never enjoyed the glory of holding a cup aloft.

He said: “It does surprise me Craig’s never won a trophy. He’s an outstanding manager. He’s been that good he has managed his country.

“He’s turned Hearts around again. He’s got longevity, he’s a workaholic and I know what the club means to him.

“He’ll be as motivated as anyone come Saturday.

“Hearts made a really good start to the season and but for some horrendous injuries could have had a stronger season. They are formidable and we’ll have to be at our best to beat them.”