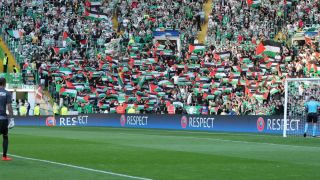 UEFA has opened disciplinary proceedings against Celtic after 'illicit banners' were displayed by their fans in the 5-2 win over Hapoel Be’er Sheva on Wednesday.

Around 100 Palestinian flags were held up by supporters in the new safe-standing area at Celtic Park prior to the Champions League play-off first-leg tie against the Israeli side.

UEFA forbids political expressions in football and on Friday confirmed Celtic had breached Article 16 (2) of their disciplinary regulations.

It is the second time the Scottish champions have been charged by UEFA for the waving of Palestinian flags, the first coming in July 2014 during a game against KR Reykjavik.

The case will be dealt with by the governing body's Control, Ethics and Disciplinary Body on September 22.