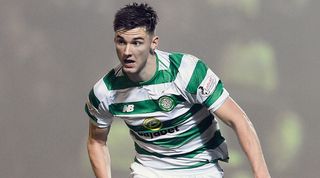 The 21-year-old Scotland international has been heavily linked with a reunion with Brendan Rodgers at Leicester this summer, with Ben Chilwell reportedly high on Manchester City's agenda, but the Foxes aren't the only interested party.

German outlet Kicker writes that Bundesliga giants Dortmund are looking to strengthen the left side of their defence in the upcoming transfer market.

According to the report, Tierney fits the bill in terms of profile and ability, but demands of around €30 million (£25.6 million) are believed to be too high for the German club.

However, according to The Mirror, Arsenal have identified the Celtic youngster as a target.

Unai Emery is said to want three new arrivals in the summer, with left-back one of the positions needing strength.

Tierney has a deal at Celtic Park until 2023 and has scored one goal in 35 appearances across all competitions for the Scottish champions this season.