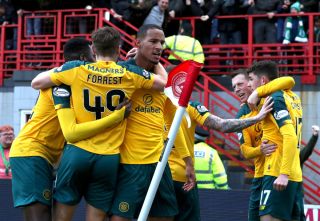 Celtic face a double disciplinary charge over claims they failed to keep their players in check during recent clashes with Hamilton and Partick Thistle.

The Hoops have been issued with a notice of complaint relating to last month’s William Hill Scottish Cup win at Firhill and Sunday’s 4-1 triumph over Accies at the Foys Stadium.

Hamilton have also been charged with breaching the same disciplinary rule 204 and both clubs face a maximum fine of £20,000 if found guilty.

Disciplinary rule 204 requires “officials, team staff, employees and players conduct themselves in an orderly fashion at all times during and/or after a match”.

It also specifically warns individuals against “becoming involved in a confrontation; conduct that is likely to lead to or to exacerbate or prolong a hostile or argumentative situation with players and/or team staff from the opposing team and/or match officials; and conduct that may otherwise incite disorder”.

The news comes 24 hours after Hoops striker Leigh Griffiths learned he would not face action over his alleged stamp on Accies defender Sam Woods.

But both clubs will now have to answer for the conduct of the players during the melee that followed the first-half bust-up at a hearing set for Thursday, February 20.

The flashpoint occurred after Griffiths dragged Woods to the ground following a clash on the half-way line and then appeared to bring his right foot down on Woods’ prone body.

The Scotland striker and Hamilton midfielder Alex Gogic were both booked after an exchange of pushes as players from both sides rushed in.

The other Celtic charge relates to a stoppage-time incident during their 2-1 cup victory over the Jags at Firhill on January 18.

Motherwell were handed a censure and a suspended £2,500 fine back in October after defender Richard Tait was accused of a similar offence after giving away a spot-kick during a win at St Johnstone.

Meanwhile, Rangers and Hibernian will learn their fate on Thursday after they were also charged by compliance officer Claire Whyte of failing to control their players.

Striker Alfredo Morelos and winger Ryan Kent both escaped individual punishment for gestures made during the December 29 Old Firm triumph but Rangers as a club have been sanctioned.

Kent enraged the home support at Parkhead when he pointed to his temple in an apparent gun gesture after firing Rangers ahead while Morelos made a cut-throat signal as he walked off following his stoppage-time red card.

Coach Michael Beale also faces a misconduct charge for his protests in the wake of the Colombian’s sending-off.

Individual notices of complaint were issued to Hibs assistant boss John Potter and Rangers coach Tom Culshaw after they were each sent to the stand.