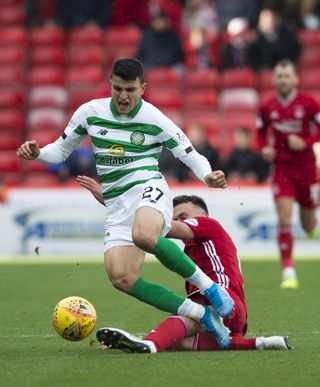 Mohamed Elyounoussi admits a Livingston lesson lay behind their 4-0 thrashing of Aberdeen at Pittodrie on Sunday.

The Hoops had lost 2-0 to the Lions on the back of their Europa League victory over Romanian side Cluj by the same score early in the month.

However, following a dramatic 2-1 Europa League win over Italian giants Lazio on Thursday night, the Ladbrokes Premiership leaders were in no mood for another slip up in the Granite City.

Goals from French forward Odsonne Edouard, 18-year-old Dutch right-back Jeremie Frimpong, winger James Forrest and Elyounoussi had the points secured by the interval and they ended the day still top of the table by goal difference over Rangers.

The Norway international, on loan from Southampton, pointed to the game in West Lothian as a pre-match warning.

He said: “It was a good game on Thursday and we remembered what happened the last time we played a European game and the loss in Livingston so we wanted to show a reaction.

“It was a professional game from our side.

“We followed our game plan and executed it well and scored some nice goals and we controlled the game in the second half.

“Every team in the league wants to win at Celtic and it’s always a tough game.

“Obviously, Aberdeen had fresh legs so we knew it was going to be a tough game.

“So, yeah, we had that (Livingston) in the back of the head, but obviously, we wanted to come and win the game and do our best.

“But there are always games coming up so we need to recover well and look forward to the next one.”