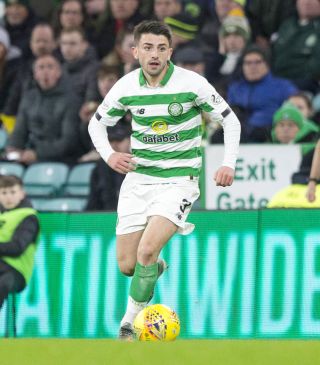 Greg Taylor is looking for some Europa League rehabilitation when Celtic take on Rennes at Parkhead on Thursday night.

Before he made his move from Kilmarnock to Parkhead in September, the left-back was part of the Killie side knocked out of the competition in the qualifiers by Welsh minnows Connah’s Quay Nomads.

To much embarrassment, after winning 2-1 away in the first leg, the Ayrshire side went down 2-0 in front of their own supporters at Rugby Park in July.

In the absence of injured Boli Bolingoli and Jonny Hayes, the 22-year-old Scotland defender is set to make his first Europa League appearance for the Scottish champions against the French side in the penultimate Group E game and is looking for a more positive experience.

He said: “That was one of the first things I said when joined Celtic – let’s hope that’s not my last game in Europe.

“Hopefully if I get my chance tomorrow then it will be a better time than it was at the start of the season.

“My memory is disappointment probably. It was a massive feat for a club like Kilmarnock to get into the Europa and to throw away a chance like that was disappointing at the time.

“Thankfully now I have another chance in Europe at a massive club like Celtic so just looking forward to it now.”