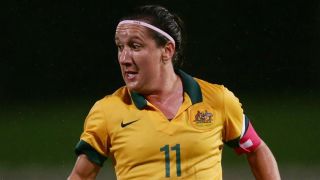 Co-captain Lisa De Vanna has played the significance of bringing up a century of international appearances in Australia's opening Women's World Cup game against United States, insisting her only focus is on ending a barren spell against their Group D rivals.

Australia have failed to beat USA in 25 previous meetings, but Melbourne Victory striker De Vanna is confident of upsetting the 2011 runners-up on Monday.

"For me it's about getting the results and if it's the US, Nigeria or Sweden we need those three points," said the forward, who made her international debut in 2004.

"It's a crucial game no matter who we play. It just makes it a little bit more hype because it is such a big nation like the USA and it's my 100th game.

"For me it is all about, personally, leaving a legacy and leading the team to the best they can possibly be.

"Winning that game we have never beat the US before ever and to do it at a World Cup in front of millions of people and being the captain, you can't put a fairytale ending to that.

"But the three points is what we want, the captaincy and the 100 caps, it's not important. I feel that if we go out and get those three points it just puts a state mark to the world that Australia are here to take on the world.

"Every game I play for the Matildas I wear my heart on my sleeve for my country and to finally make it to 100, it's a big milestone.

"It's hard to focus on that when you've got such a big game. It's a great honour and to be co-captain of this team just caps it off."