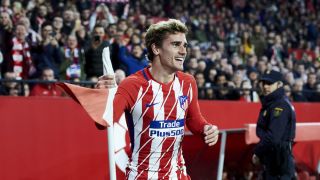 Antoine Griezmann has no interest in leaving Atletico Madrid, according to club president Enrique Cerezo, despite rumours suggesting the France international could join Barcelona next season.

Griezmann signed a new contract with Atletico in June that runs in the end of the 2021-22 campaign, but it has not stopped reports of his departure.

That speculation has intensified recently, with some outlets even suggesting the attacker has an agreement with the Catalan giants.

Coach Diego Simeone ignored those claims after Sunday's 3-0 win over Celta Vigo in LaLiga, and Cerezo is adamant his prized asset will not be sold.

"Griezmann has a contract and cannot sign with another team, these are facts," said Cerezo, as quoted by Marca.

Manolo, an Atleti legend, handed the trophy for the Player of the Month for February! Keep it up, Antoine!March 11, 2018

"He has not told me at all about wanting to move away so it would surprise me a lot of this was his desire.

"What is certain and what I can tell you is that he is under contract and this means no other sign can sign him without our permission, and it is a long contract.

"We should not be nervous about this, I believe he is happy and wants to continue to play for Atletico beyond this season."

Griezmann has scored 21 goals for Atletico in all competitions this season, including eight in his last five matches.