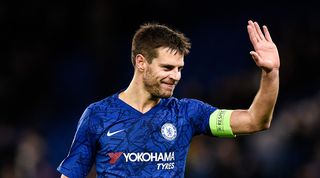 Cesar Azpilicueta says Chelsea want to win silverware this season as it is in the club's DNA.

Frank Lampard's side are through to the Champions League round of 16, where they will face Bayern Munich, and the fourth round of the FA Cup, where Hull will provide the opposition.

Azpilicueta has won two Premier League titles, the Europe League, an FA Cup and a League Cup since moving to Stamford Bridge in 2012.

Chelsea won the Champions League shortly before the Spaniard arrived in west London, and no club has won more Premier League crowns since Roman Abramovich's takeover in 2003.

The Blues have no chance of finishing on top of the pile this term, with Lampard's men currently 22 points adrift of league leaders Liverpool.

But Azpilicueta expects Chelsea to continue challenging for trophies, both at home and abroad.

“I think one of the characteristics of Chelsea throughout this period has been winning trophies and even when we didn’t win something, we did not have any long spells without lifting a trophy," he told the club's official magazine.

“That is obviously a big part of the ambition of the club, to always aim for trophies, and it i something we have done not only in England, but also in Europe, with the Champions League and the Europa League twice.

“We have won the Premier League a couple of times since I arrived as well, so I think it is in our DNA that we always fight for trophies and hopefully we can keep going in this direction.”

A 3-0 victory over Burnley on Saturday kept Chelsea five points clear of Manchester United in the race for the top four.

The Blues will return to action on Saturday when they travel to St James' Park to take on Steve Bruce's Newcastle.