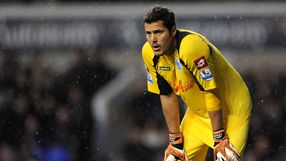 The Tyne-Wear derby between Sunderland and Newcastle United at the Stadium of Light also finished in a 1-1 draw with both matches featuring an own goal and a sending off for the away side.

QPR raced into the lead against Everton when Hoilett, picking the ball up deep in his own half after an Everton corner, powered his way through the centre of the field, holding off a challenge from Phil Neville before shooting.

The ball hit the heel of Leighton Baines and looped over the wrong-footed Everton goalkeeper Tim Howard, but Everton were level 30 minutes later when Sylvain Distin's header hit a post and the back of goalkeeper Julio Cesar and trickled over the line, with the goalkeeper being credited with an own goal.

Everton were reduced to 10 men when Steven Pienaar was sent off for a second yellow after 61 minutes that will keep him out of next week's Merseyside derby against Liverpool.

QPR remain bottom behind Reading on goal difference with three points, the only other team without a win.

"I think its an important point but ideally we would have preferred to have taken the maximum today because our performance warranted that," QPR manager Mark Hughes told Sky Sports.

"Some of our play, especially in the first half was excellent."

Sunderland and Newcastle finished an entertaining Tyne-Wear derby all square with Newcastle scoring at the right end through Yohan Cabaye after three minutes and at the wrong end when Demba Ba put through his own net five minutes from time.

Newcastle were reduced to 10 men after 25 minutes when Cheick Tiote was sent off for a rash kick at Sunderland's Steven Fletcher.

The results had little impact on the league standings with Everton staying fourth on 15 points from their eight matches, three behind Manchester United and Manchester City and seven behind leaders Chelsea.

Newcastle moved from 12th to 11th place on 10 points while Sunderland stayed 14th on eight points having played seven matches.