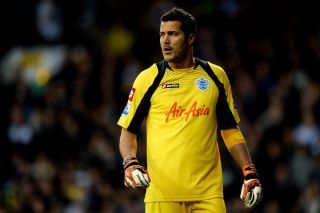 The Brazil international had a deal with newly promoted Premier League side QPR until June 2016, but the two parties have agreed to mutually end their association.

Julio Cesar has had a largely forgettable time at Loftus Road since joining in August 2012, suffering relegation from the top flight that season before being shipped out on loan to MLS side Toronto FC last February.

"QPR have agreed to release goalkeeper Julio Cesar, with the player set to sign for Portuguese side Benfica," read a statement on QPR's official website.

"The Brazilian, who was contracted until June 2016, has left Loftus Road by mutual consent with immediate effect.

"The 34 year-old joined QPR on a free transfer in August 2012, going on to make 27 starts in all competitions.

"The club would like to thank Julio for his services to QPR and wish him all the best for the future."

Benfica have been keen to add to their goalkeeping options after Jan Oblak joined Atletico Madrid in July.