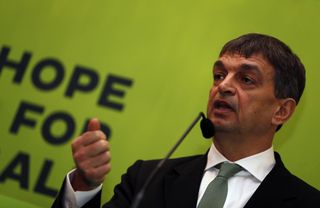 In the latest of his "thematic letters" to the governing body's 209 member associations, Champagne - a former deputy secretary general with FIFA - has conducted a statistical analysis of the current state of the European game.

The Frenchman, who announced his candidacy in January, cites the Bosman ruling, the format of the UEFA Champions League and the distribution of money among clubs as contributing factors in what he sees as the relegation of once-competitive clubs to the role of "talent-producers" for the wealthiest ones.

He is also critical of the financial barriers that stand in the way of clubs from smaller nations reaching the latter stages of European competitions and highlights failings in the UEFA Europa League.

Champagne goes on to suggest possible solutions for the perceived problems with European football, including a restructure of competitions at both club and international level, changes to the distribution of resources and restoring "the centrality of training younger players".

"Before, European football could be described as rather homogenous, with a three- or four-gear system but with the possibility to go up and down," he said in conclusion.

"Now, it is a two-speed football with an increasingly unbridgeable gap separating the ultra-elite of the wealthiest ones and the remaining 99 per cent of clubs.

"Moreover, it is feared that the current hierarchy will solidify in the absence of drastic reform.

"In this fight for the sanity of our game, for the fair sharing of the opportunities brought to football by its globalisation, it is about time to show a united front."