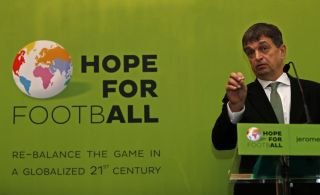 Champagne is the only person who has voiced their intent to stand against Blatter in 2015 in an attempt to deny him a fifth consecutive term.

One of the primary issues that still dogs the organisation is the awarding of the World Cup to Qatar - with questions raised over the integrity of the bidding process, worker conditions on stadiums and the practicalities of holding the tournament in the scorching heat of the Arab summer.

With investigations currently being carried out by the FIFA Ethics Committee investigatory head Michael Garcia, Champagne says there are a number of options if the World Cup is taken away from Qatar.

"Blatter's only mistake was to hold the vote for two World Cups (2018 and 2022) at one time," he told Sports Business Insider.

"You can't hold a World Cup in 45 degree heat. To move it, will have an impact on three seasons - before and after - and will distort competitions around the world.

"It could be that there is a re-vote involving all bidders; or the other four for 2022 (Australia, Japan, Korea, USA), that it goes to the 'silver medallist' (USA) or that it is completely opened up again."

Much of Blatter's governance has been marred by allegations of corruption at FIFA, with Champagne hoping to offer a more open approach to the organisation if he is voted in next year.

"The game has also grown enormously in the time (Blatter has) been there," he added.

"I want to build on the good he has done.

"And I also want to be more transparent, be more accountable, bring equity into the game, make right the decisions that have been wrong and focus on the four areas of growth in world football."