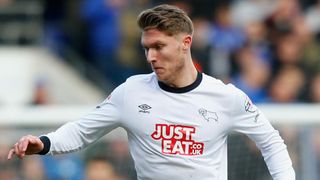 Derby returned to the automatic play-off places last weekend with a 1-0 victory at Ipswich Town, who were previously second.

Manager Steve McClaren, who had a brief spell in charge at The City Ground in 2011, now prepares his Derby side to welcome neighbours Forest to Pride Park on Saturday.

The reverse fixture finished 1-1 in September, but Derby have fond memories of battering Forest 5-0 in last season's corresponding match.

Midfielder Hendrick insists that encounter means nothing now and is urging his team-mates to fight for victory against a Forest side desperate to ease the pressure on boss Stuart Pearce by ending a seven-match winless league run.

He told Derby's official website: "It isn't going to take a lot to get us up for that game. The atmosphere is going to be unbelievable as usual.

"There is just something about this league and there always has been. Teams are getting beaten on a regular basis and they play a top side and turn them over.

"That can happen if we are not right, so we have got to make sure we are ready for the game."

Bournemouth, who are top on goal difference, lost in the league for the first time since September at home to Norwich City last Saturday.

Eddie Howe's men attempt to get back on track at struggling Rotherham United, while Ipswich are on the road at lowly Millwall, who are out to avoid a fifth straight defeat.

Middlesbrough and Brentford will look to close the gap on the automatic places when they host Huddersfield Town and face a trip to Brighton and Hove Albion respectively.

Guy Luzon starts the task of reversing Charlton Athletic's fortunes at Watford after being confirmed as head coach on Tuesday.

A nine-match winless run saw Bob Peeters pay the price and lose his job, with Luzon relishing the challenge ahead.

"I'm a fan of English football. The tempo, rhythm and atmosphere is fantastic," he said.

"I'm the kind of guy who hates to lose and loves to win. Football is my love, it's my passion."

Wolves could hand a debut to striker Benik Afobe - who joined from Arsenal on Wednesday - when they host bottom side Blackpool.

In other matches, Norwich City target a return to top six with victory over Cardiff City and Fulham entertain Reading.