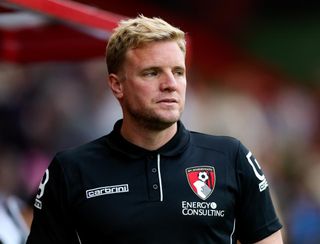 Howe's side lead the league on goal difference after opening their campaign with victories over Huddersfield Town and Brentford.

The ex-Burnley boss is adamant his side are not getting carried away, though, as they prepare for their toughest test yet.

"We are quietly pleased but realistic enough to know that it is early days," he told Sky Sports News.

"They'll (Forest) be a different prospect, they have plenty of quality, have invested heavily and are one of the favourites to go up.

"We have to be mindful of that but we're playing at home, we need to play to our strengths and impose our game on them."

Forest boss Stuart Pearce has spent big during the close-season, bringing in the likes of Britt Assombalonga from Peterborough United and Michael Mancienne from Hamburg.

Assombalonga scored twice in Forest's 2-2 draw with Bolton Wanderers on Saturday as they came from behind twice to maintain their unbeaten start.

Victory at Dean Court would move Forest above Howe's side but they will be wary – Bournemouth beat them 4-1 at the same ground in April.

Millwall are the only other side in the division yet to drop a point and will hope to keep that run going at Sheffield Wednesday.

Ian Holloway's side beat Leeds United 2-0 on the opening day and backed it up with a shock 1-0 win at Fulham, giving Millwall confidence ahead of their trip to south Yorkshire.

Derby County and Charlton Athletic are two of seven sides with four points at this early stage and they will go head-to-head at The Valley.

Cardiff City and Norwich City will look to collect a second home win of the season when they entertain Wigan Athletic and Blackburn Rovers respectively, while the third side relegated from the Premier League last term, Fulham, have more pressing issues to contend with.

Felix Magath's men have lost both matches on their return to the Championship, increasing the importance of their home clash against Wolves.

Buoyed by Billy Sharp's late winner on debut against Middlesbrough, Leeds will hope for the same outcome but a better performance against struggling Brighton and Hove Albion, who have yet to win or score under Sami Hyypia.

Other matches see managerless Huddersfield Town face the daunting task of visiting Reading, crisis club Blackpool entertain Brentford and Bolton will hope to add the point against Forest when they play Middlesbrough at the Macron Stadium.