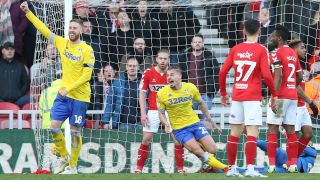 A dramatic 101st-minute header from Kalvin Phillips gave Leeds United a 1-1 draw at Middlesbrough, enough to send them top of the Championship.

The match between two promotion hopefuls was delayed as paramedics attended to Jack Clarke on the Leeds bench, with Phillips going onto equalise in the 11th of 12 added minutes to put Marcelo Bielsa's men a point clear of Norwich City.

Play-off chasers Bristol City won 1-0 away at Blackburn Rovers, while Derby County remained just outside the top six by seeing off Hull City with a 2-0 home victory and Birmingham City beat QPR in a classic encounter.

Nottingham Forest, Preston North End and Swansea City were the other winners in England's second tier on Saturday. Rotherham United and Wigan Athletic drew 1-1, while there were no goals between Sheffield Wednesday and Reading.

Stoke City host West Brom in the later game, while second-placed Norwich are not in action until a Sunday home derby against struggling rivals Ipswich Town.

Lewis Wing put Middlesbrough ahead at the Riverside by converting George Friend's pass inside two minutes of the restart.

Eighteen-year-old Clarke was replaced at half-time after feeling unwell and was treated by paramedics on the bench in the second half. He was sent to hospital to be checked over, with Bielsa later reporting he was feeling "better".

Pontus Jansson headed against the post for Leeds, but the visitors were not to be denied, Phillips converting an aerial effort of his own – his first goal of the season coming after Liam Cooper had sent a corner back across the face of goal.

Che Adams scored a hat-trick as Birmingham won a thrilling clash at QPR 4-3.

Three goals from Adams and Harlee Dean's header had the visitors four goals up after 42 minutes, but astonishingly they almost failed to hold on.

Matt Smith scored twice and Jordan Cousins also struck for QPR, who then had a penalty to level matters in stoppage time. However, Lee Camp saved Nahki Wells' effort from 12 yards.

BRISTOL CITY AND DERBY KEEP UP THE PRESSURE

After Sheffield United lost a three-goal lead to draw with Aston Villa on Friday, and Boro failed to hold on against Leeds, City and Derby took advantage.

City have now won eight straight games in all competitions after substitute Eros Pisano scored from close range 10 minutes from time against a Rovers side who had impressively won their last three league games at Ewood Park.

Martyn Waghorn – who also netted in two recent FA Cup games – scored a double as Derby were more comfortable in their triumph over Hull, Ashley Cole making his debut for Frank Lampard's men as a stoppage-time substitute.

NO JOY FOR THE BOTTOM SIX

With bottom-of-the-table Ipswich not in action until Sunday, 23rd-placed Bolton Wanderers' wait for a 2019 league win continues after they lost 2-1 at home to Preston.

Rotherham and Wigan drew in a meeting between two members of the bottom six, while Millwall lost 1-0 at Swansea courtesy of George Byers' first goal for the Welsh club. Elsewhere, Forest beat Brentford 2-1.

Another three points on the road for North End! Get in! pic.twitter.com/p9OB1wi1NS— Preston North End FC (@pnefc) February 9, 2019