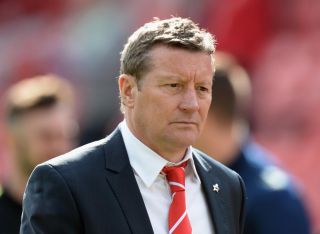 After Yeovil Town's drop was confirmed on Friday, Barnsley's fate was eventually decided on Saturday despite taking the lead at the Riverside Stadium.

Danny Graham's fifth goal since returning to Middlesbrough and a second for Tomlin in the dying stages condemned Barnsley to League One football next season and manager Danny Wilson afterwards lamented a season-long lack of quality.

"It's been a pattern and we've not scored enough goals. That's been the main problem. It's a horrible feeling," he said.

"You can't fault the boys. (At) certain times in the game you need that quality in abundance and we haven't got it in key areas."

Birmingham City look likely to join Barnsley after Matt Smith, Danny Pugh and a Paul Caddis own goal helped Leeds United restore some pride after a tough season but saw City drop into the relegation zone - albeit with a game in hand on Doncaster Rovers and Millwall above them.

Doncaster were beaten 3-1 by play-off hopefuls Reading while Millwall held fourth-placed QPR to a 1-1 draw thanks to a late Scott Malone equaliser.

Charlton are not yet safe after they were beaten 3-1 by Blackburn Rovers while Blackpool were the big winners at the bottom - picking up their first win in eight matches to prevent Wigan mathematically booking a play-off spot and move themselves out of the bottom three.

Uwe Rosler's men were given a shock thanks to goals from Andy Keogh and Stephen Dobbie as they slipped to sixth.

Wigan can still secure a play-off spot with victory over Birmingham in midweek while their potential post-season opponents Derby County hit four past 10-man Watford to tie up third place.

There were wins for promoted top two Leicester City and Burnley, over Huddersfield Town and Ipswich Town respectively, as Nottingham Forest's play-off hopes were mathematically ended by Bournemouth.

Braces from Yann Kermogant and Lewis Grabban helped the hosts to a 4-1 win at Dean Court while Bolton Wanderers saw off Sheffield Wednesday 3-1 at Hillsborough.