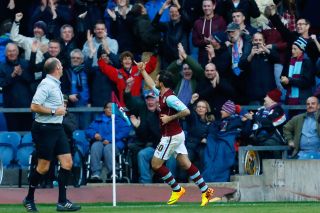 Sean Dyche's men made it seven straight league victories to go three points clear with a confident display as Danny Ings gave the hosts the lead at Turf Moor after 65 minutes as he slotted home after combining with strike partner Sam Vokes.

And in-form Ings secured the points from the penalty spot two minutes from time, converting from 12 yards after he had been felled by Joey Barton to hand QPR their first Championship defeat of the season.

Leicester City moved above QPR into second place after beating Bournemouth 2-1. Winger Jamie Vardy proved to be the hero for Leicester as he scored the winner 19 minutes into the second half after Marc Pugh had cancelled out David Nugent's opener.

A  92nd-minute own goal from Steve Davies earned Blackburn Rovers a 2-2 draw at Blackpool.

Tom Ince and Jordan Rhodes traded penalties for the two sides in the early stages, before Dan Gosling put Blackpool back in front. However, there was to be a final twist as Davies headed into his own net after former Blackpool striker DJ Campbell and Jack Robinson had both been sent off for their part in a late brawl.

A Matty Fryatt goal salvaged a 1-1 draw and a share of the spoils for winless Sheffield Wednesday at Barnsley, who had taken the lead through Marcus Pedersen.

Elsewhere, Derby County drew 1-1 with Birmingham City and Bolton Wanderers were held to the same score by Ipswich Town.