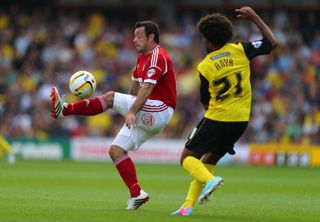 Billy Davies' team now sit top on goal difference, with Blackpool, Leicester and QPR all delicately poised on 10 points alongside them.

Andy Reid opened the scoring in the sixth minute with a well-taken half volley as Forest's 100 per cent start to the season looked set to continue.

The 24-year-old joined Gianfranco Zola's side from Forest in the close-season, and he revelled in celebrating the strike against his former club - the first Davies' side have conceded this season.

Also in action on Sunday were Wigan Athletic and Middlesbrough, who played out a 2-2 draw at the DW Stadium.

Owen Coyle's team went ahead after 17 minutes, Grant Holt converting a penalty given after Marc-Antoine Fortune was brought down by George Friend.

Friend was eager to remedy his mistake and he did just that on the stroke of half-time, playing on after James McArthur brought him down and scuffing an effort across Scott Carson.

And things got worse for the home side in the second half, with Grant Leadbitter netting his first goal of the new season after some poor defending from Wigan.

However, the hosts kept the pressure on and their reward finally came six minutes from time as Jordi Gomez smashed a free-kick home.