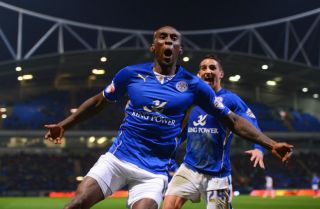 Needing a victory to seal top spot and end Burnley's slim hopes, Pearson's side finished the job thanks to a moment of magic from Dyer after 62 minutes at the Reebok Stadium.

Dyer cut in from the left flank and unleashed a rising effort across Bolton goalkeeper Adam Bogdan and into the top corner.

It was enough to spark wild celebrations at the final whistle as the travelling supporters saluted the Leicester players and Pearson as the club gears up for life back in the Premier League.

Hoping to join Leicester and Burnley in the top flight are Reading, who hauled themselves back into the play-off pack with a 2-0 home win over Middlesbrough.

It was 2-0 five minutes later when another Obita delivery from the flanks, this time a free-kick, prompted Middlesbrough's George Friend to steer a flicked header into his own net.

Reading's win lifted them up to sixth and knocks Brighton & Hove Albion outside of the play-off spots, one point behind in seventh.