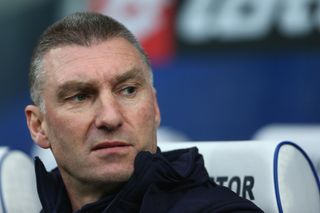 Nigel Pearson's side have enjoyed a fine campaign in the second tier of English football and their promotion charge showed no signs on stopping at St Andrew's on Tuesday.

Lloyd Dyer opened the scoring on 24 minutes for the visitors and, although Leicester continued to control possession, the scores remained the same until half-time.

It took until the 83rd minute for Leicester to make things comfortable with Jamie Vardy calming the visitors' nerves.

Peter Lovenkrands grabbed a 90th-minute consolation, but Leicester were left celebrating their record-breaking achievement at the final whistle.

At the Madejski Stadium, Reading followed a 7-1 demolition of Bolton Wanderers in their last home league outing by defeating managerless Blackpool 5-1.

Adam Le Fondre was once more the hero, grabbing his second hat-trick in as many home matches, while Pavel Pogrebnyak and Hal Robson-Kanu also on the scoresheet for Nigel Adkins' side.

QPR remain eight points adrift of Leicester in second, but maintained their promotion push in a 2-1 victory over Bolton.

After a sluggish start, Charlie Austin broke the deadlock at Loftus Road four minutes before half-time and Karl Henry doubled the lead in the 50th minute.

Jay Spearing ensured a tense ending in the 85th minute, but Harry Redknapp's men saw out the remaining time.

Burnley sit third and were held to a 0-0 draw at Turf Moor by Brighton and Hove Albion, as fellow promotion hopefuls Derby County came from 2-0 down to defeat Yeovil Town 3-2 at Pride Park, with the visitors slipping to the bottom of the table.

Doncaster Rovers moved out of the relegation zone with a 3-0 victory over 10-man Charlton Athletic at the Keepmoat Stadium, with Chris Powell's men slipping into the bottom three.

Nick Proschwitz scored on his Barnsley debut in a 2-2 draw with Blackburn Rovers. Tom Cairney and Rudy Gestede had put the visitors ahead before half-time, but Chris O'Grady's penalty secured a point for Danny Wilson's men.

Lowly Millwall came from behind to secure a 1-1 draw with fellow strugglers Sheffield Wednesday. Giles Coke's 69th-minute opener was cancelled out by DJ Campbell's first goal for the club. Coke and Millwall's Shane Lowry were then both shown straight red cards in the closing stages for an altercation in the corner flag.

In other fixtures, Bournemouth defeated Huddersfield Town 2-1, Middlesbrough were held to a 0-0 draw by Wigan Athletic and Leeds United and Ipswich Town played out a 1-1 draw at Elland Road.