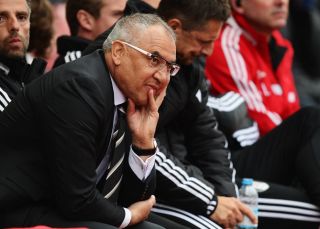 Fulham manager Magath had called for patience ahead of Saturday's clash at Pride Park after the London club lost their first three games in the second tier following their relegation from the Premier League.

But the experienced German could be on borrowed time after watching his side capitulate in the second half as Steve McClaren's side ran riot to leave Fulham bottom of the table.

Jamie Ward gave Derby a half-time lead with his third goal in his last two games, but Scott Parker pegged the home side back when he equalised nine minutes after the break.

Derby reacted well to that setback and Craig Bryson put them back in front. Martin then gave them breathing space two minutes later and scored a fourth goal before Simon Dawkins added insult to injury two minutes from time.

Victory for Derby moves them up to seventh spot in the table, which their arch-rivals Nottingham Forest lead after thrashing Reading 4-0 at the City Ground.

Free-scoring Forest have made a dream start to Stuart Pearce's tenure and his new signings produced the goods once again at the expense of Nigel Adkins' side.

Michail Antonio scored twice against his former club, while big-money signing Britt Assombalonga and Matty Fryatt were also on target again as Reading were put to the sword.

While Fulham have struggled to adapt to life in the Championship, Norwich City have made a promising start and their supporters will have the bragging rights after Lewis Grabban scored the only goal of the game at Ipswich Town to take his tally to four goals in as many league games following his move from Bournemouth.

Watford occupy second spot after Fernando Forestieri scored twice in a 4-1 thrashing of nine-man Leeds United and Wolves are fourth behind Norwich courtesy of a late Mark Hudson own-goal at Molineux that consigned Cardiff City to their first defeat.

Sheffield Wednesday remain unbeaten and are up to sixth after Stevie May scored his first goal for the Yorkshire club and Atdhe Nuhiu struck twice in a 3-2 win at Middlesbrough.

Hull City target Jordan Rhodes opened the scoring in Blackburn Rovers' 3-2 victory over Bournemouth, while Blackpool are still without a point following their 1-0 defeat at Lancashire rivals Wigan Athletic.

In the other games to be played on Saturday, Rotherham United won 1-0 at Millwall, Brighton and Hove Albion beat Bolton Wanderers 2-1 and Birmingham City drew 1-1 at Brentford.