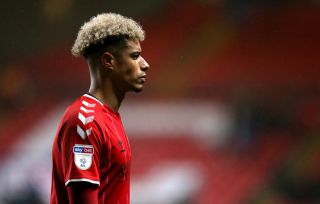 First-half goals from Lyle Taylor and Andre Green had seemingly set Lee Bowyer’s side on course for a comfortable home victory.

But Cauley Woodrow pulled a goal back after 72 minutes, sparking belief that the visitors could find a leveller and keep Charlton within six points of them in the fight for survival.

Barnsley deployed an adventurous 3-4-3 formation, but Gerhard Struber’s hopes were undermined within nine minutes by a reckless foul by Aapo Halme on Charlton playmaker Jonny Williams.

Josh Cullen floated the resulting free-kick onto the head of Jason Pearce, whose headed knockdown was toe-poked past Barnsley goalkeeper Sami Radlinger by Taylor.

A brilliant save from Dillon Phillips preserved the home side’s lead in the 22nd minute as Barnsley looked to respond in kind from their own free-kick.

Alex Mowatt’s floated ball was met firmly by the head of Mads Andersen, who watched on in amazement as Phillips plunged to his right to claw the ball away from the bottom corner.

The ball squirmed out to Halme, who lifted his follow-up shot against the outside of the post.

While Charlton looked largely in control, they contributed to occasional moments of comic panic, most notably when Cullen and Alfie Doughty tried to be too clever with a 43rd-minute free-kick, gave possession away and saw Barnsley set off on a counter-attack only for Jacob Brown to sky his shot at the end of the move.

The half ended as it had begun, with Charlton scoring from a free-kick. This time Doughty chose the obvious option of clipping the ball across. Pearce headed it down once more and, after Naby Sarr had swung and missed, the ball ran kindly for Green to sweep gleefully home the second goal of his loan spell from Aston Villa.

If it seemed as though the result was set, it took Barnsley less than eight minutes of the second half to offer a reminder of their threat.

Andersen’s shot from outside the area swerved in the air and forced Phillips to block uncomfortably with his forearm. The ball ran out to Woodrow, whose connection was true but sent it crashing against the Charlton post.

Cullen sent a diving header wide of the post at the other end before Woodrow made it 2-1 with 19 minutes remaining, profiting from Luke Thomas’ surging run to rifle the ball into the far corner.

Suddenly Barnsley had some confidence and Brown sent a fierce shot against the bar. Kilian Ludewig’s follow-up was cleared off the line by fellow substitute Jake Forster-Caskey.

The visitors could not find an equaliser, however, as they suffered a heavy blow to their fight against relegation.