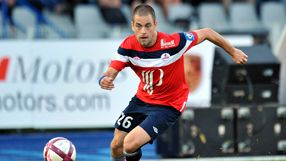 Cole joined Les Dogues on a season-long loan from Liverpool last summer and has scored three league goals so far.

Cole's team-mate, Chedjou, has admitted that the England international's winning mentality and experience have helped Lille to their current third-placed position in the league.

Speaking exclusively to FourFourTwo.com, Chedjou said: "It’s true that he [Cole] has brought us a winning culture that the English people have.

"At training, he is on it from the start. That's what makes the difference between the great champions and the ones who want to be champions.

"He has brought his experience and his approach for the big games. It has really helped us.

"Even if he doesn't really speak French, even at training he talks to us. He tells us where to be placed and what we should do in certain games because he obviously has a high level of experience.

"He is really good for us – he is an added value. I hope for him he will be able to make it into the English national team again.

"Unfortunately, it will be difficult for Lille to keep him because we know that Lille and Liverpool don't have the same financial situation but it has been a pleasure to share this season with him. I hope that our paths will cross again."

Chedjou described Cole as a "kind" and interesting character in the dressing room and praised the 30-year-old's determination to adapt to life in France.

"When Joe arrived, I didn't know the person - for me he was a star. Coming to France was a regression [for him] but I knew he would help us," he said.

"But he has been really good with us in the changing room. He is a really nice person. He is kind."

Chedjou added: "As soon as he arrived, he started to learn French. He proved himself at Chelsea, West Ham and Liverpool - there is no need to introduce him! For me, he is a great player.

"He gave me his Champions League shirt when we played against CSKA Moscow in Russia! It is a really great pleasure to play with him this season."