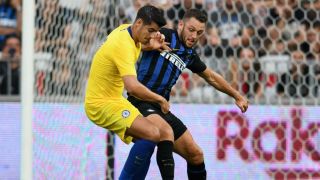 Alvaro Morata pressed his claims to remain Chelsea's first-choice striker with an encouraging display in a penalty shoot-out win over Inter in the International Champions Cup on Saturday.

Questioned for an unconvincing debut season at Stamford Bridge, the reported AC Milan target turned in a promising 65 minutes as the Blues prevailed from the spot following a 1-1 draw in normal time.

Willy Caballero also enjoyed a measure of redemption in Nice as the goalkeeper put a forgettable World Cup behind him by denying Milan Skriniar and giving Chelsea a 5-4 shoot-out success for their second straight win under Maurizio Sarri.

Morata was particularly influential early on, going it alone in the eighth minute with a superb turn and shot that fell kindly for Pedro to tuck away the opener, just as he did in the 1-0 defeat of Perth Glory that kicked-started the Sarri era.

The early strike would not be enough on this occasion, though, as Inter stemmed the tide and equalised soon after half-time through Roberto Gagliardini.

Both sides failed to put away late opportunities to snatch victory in normal time and Chelsea ultimately held their nerve, keeping their winning run intact ahead of a meeting with Arsenal in Dublin on Wednesday.

Sarri retained the starting XI that won in Australia on Monday and the early signs were of a team comfortable with its fluid new approach.

Morata spearheaded the fast start by first laying off a chance that Ross Barkley drove into the feet of Samir Handanovic, before an offside flag ruled out the Spaniard's smart header.

The 25-year-old instead took it upon himself to single-handedly create the opener, robbing Antonio Candreva of possession, twisting back to the byline and then unleashing a shot that Handanovic could only parry into Pedro's path for a simple finish.

Here is Pedro celebrating the opening goal at the Allianz Riviera...July 28, 2018

Pedro's unselfishness in attempting to return the favour to his countryman cost Chelsea a potential second inside a promising opening 20 minutes.

Candreva, the subject of persistent transfer talk in recent weeks, began to make up for his earlier error by threatening regularly on the right and creating Inter's best chance of the first half.

Matteo Politano was the recipient of the winger's smart cut-back to the edge of the area, but a poorly sliced finish meant the margin remained intact at the break.

That changed within four minutes of the restart and Chelsea only had themselves to blame, substitute Tiemoue Bakayoko's turnover allowing Mauro Icardi to put Gagliardini through on goal for the equaliser.

Midfielder Gagliardini next tried his luck with a tame strike that drew a brief fumble from the unconvincing Caballero, who had replaced Marcin Bulka at the interval and might have done better with the goal.

Both coaches began to ring the changes with around 25 minutes remaining and one of those, Tammy Abraham, quickly drew a sharp low save from Handanovic, who next turned a goal-bound Jorginho curler around the post.

An Abraham miss at one end was followed by an instinctive Caballero block to deny Lautaro Martinez and force penalties, where the Argentina goalkeeper capped a rollercoaster 45 minutes by proving the hero with the shoot-out's lone save, Cesar Azpilicueta netting the decisive kick for Chelsea.