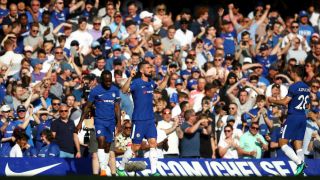 Chelsea took full advantage of Tottenham's shock defeat to West Brom by grinding out a hard-fought 1-0 win over Liverpool at Stamford Bridge, closing to within two points of the Champions League places.

Antonio Conte's men had appeared almost out of the running for Champions League football until recently, but Olivier Giroud's first-half header secured them a fourth successive top-flight win and they go into the final two games of the season within striking distance of Spurs.

Liverpool actually looked the brighter of the two sides for most of the first half, with Sadio Mane producing three decent efforts before the half-hour mark passed.

But the hosts were simply more clinical, as Giroud headed in one of Chelsea's few opportunities in the 32nd minute, repaying Antonio Conte's faith after an ineffective performance in last week's 1-0 win at Swansea City.

Having the lead allowed Chelsea to sit back a little more after the break, challenging Liverpool to break them down, and the Reds struggled to do so, with Mohamed Salah – making his 50th appearance for the club – and Roberto Firmino particularly disappointing.

Chelsea did have to withstand significant pressure towards the end, but they had enough to keep Liverpool at bay, meaning Jurgen Klopp's men - who are just a point better off than Spurs - will be starting to look over their shoulder.

Given their exploits in reaching the Champions League final in Wednesday's semi-final second leg with Roma, Liverpool's failure to produce an intense start was unsurprising.

As a result, Chelsea looked the more threatening early on, with Giroud and Tiemoue Bakayoko getting in each other's way when a decent chance presented itself in the 14th minute, before Marcos Alonso tested Loris Karius from long distance.

Liverpool did gradually wake up, however, with Mane looking particularly threatening, drilling a 25-yard half-volley at Thibaut Courtois.

The Senegal attacker then troubled Courtois again twice in quick succession just before the half-hour mark, first from long range and then from about 10 yards, prodding straight at him.

And Chelsea capitalised soon after – Victor Moses' right-wing cross took a slight deflection on its way into the area and Giroud expertly guided a header into the far corner.

The hosts were quicker out of the blocks in the second period and swiftly carved the Reds open as Fabregas fed Moses, whose fierce cross-cum-shot went just wide of the bottom-left corner.

Liverpool simply could not get going in attack, with Salah crowded out whenever he got the ball and Mane drifted from prominence.

Jordan Henderson's introduction from the bench in the 59th minute added a little extra steel, but still Chelsea looked more dangerous - Alonso nearly making it 2-0 with an exquisite volley from the left side of the area that went agonisingly wide of the top-right corner.

A Henderson cross five minutes from time nearly saw Cesar Azpilicueta put into his own net, but Courtois was on hand to pounce before former Chelsea youngster and second-half substitute Dominic Solanke went close deep into stoppage time, his effort flying just wide of Courtois' right-hand post as the hosts survived to claim a potentially vital victory.