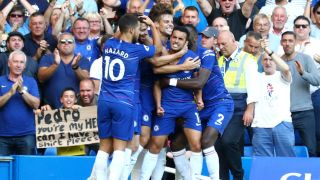 Chelsea continued their 100 per cent record in the Premier League under Maurizio Sarri with a 2-0 win over Bournemouth on Saturday.

Second-half strikes from substitute Pedro and Eden Hazard settled a tight contest at Stamford Bridge and made it four victories from four games in 2018-19.

Bournemouth had defended stoutly throughout and could easily have scored themselves before Pedro's shot deflected into the net 18 minutes from time.

Chelsea assumed early control with close to 85 per cent of the possession in the first 20 minutes, but a half-chance for Alvaro Morata that was blocked by Asmir Begovic was the best they could muster.

Bournemouth should have gone ahead half an hour in when Callum Wilson sent the ball over the bar after being picked out in space by debutant Diego Rico, but they rode their luck on the stroke of half-time when Marcos Alonso's mishit effort with his right foot struck the base of the left-hand post.

Former Chelsea man Nathan Ake spurned a glorious chance to break the deadlock early in the second half, failing to connect properly with the ball from barely a yard out, as Bournemouth continued to frustrate the Blues.

It proved to be a costly miss. After linking up with fellow substitute Olivier Giroud, Pedro turned past Ake and fired the ball beyond Begovic from the edge of the area, with the deflection off Steve Cook taking it beyond the goalkeeper's reach.

Hazard combined with Alonso to drill home a second five minutes from time and lift Chelsea level with Liverpool on 12 points from a possible 12, while Bournemouth are sixth after their first defeat of the season.

3 - Pedro has scored three goals in four Premier League games this season, more than he'd managed in his previous 23 in the competition (2). Impact. September 1, 2018

What does it mean: Chelsea becoming resolute under Sarri

For all their dominance of the ball – they averaged over 70 per cent of the possession – Chelsea often looked to be running out of ideas against a Bournemouth side not renowned for defending.

Morata was largely starved of service, Hazard impressed mostly in flashes and Begovic made only three saves before Pedro's goal. They could also have been behind, had Wilson and Ake been more clinical.

However, there was never any sign of panic from the players or Sarri in his technical area. Chelsea stayed loyal to their coach's system and, eventually, found a way through the visiting rearguard for a deserved win.

This was hardly a sparkling performance, but showing this kind of resolve to get the points while still adjusting to Sarri's methods will doubtless please their head coach.

Pat on the back: Rico plaudits richly deserved

Stamford Bridge is not exactly a forgiving place to make your Premier League debut, but Rico looked right at home down the Bournemouth left.

He doubled up with Ake to keep Willian quiet and was a menace going forward, creating three chances - one of which should have ended in a goal from Wilson in the first half.

The service to Morata was largely poor throughout his hour on the pitch, but this was nonetheless an anonymous display.

The Spain striker won fewer than half his 16 duels and touched the ball only 11 times before being taken off for Giroud, who played a role in helping Pedro score Chelsea's first.

After the two-week international break, Chelsea are at home once again, with Cardiff City the visitors on September 15.

Bournemouth, meanwhile, will host Leicester City on the same day.