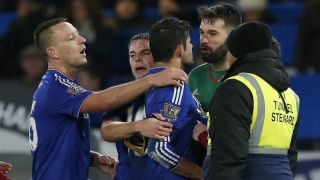 Chelsea and West Brom have been hit with fines of £65,000 and £35,000 respectively by the Football Association (FA) for failing to control their players during their fixture at Stamford Bridge on January 13.

Claudio Yacob, who had already been booked, sparked an angry confrontation between players after an off-the-ball trip on Chelsea striker Diego Costa, before the West Brom midfielder was substituted shortly after having avoided further punishment by referee Anthony Taylor.

Both clubs have now been fined after accepting FA charges, with another flare-up occurring just after the final whistle of the Premier League fixture, which finished 2-2, and have also been warned over their future conduct.

"Chelsea and West Bromwich Albion have been fined £65,000 and £35,000 respectively and warned as to their future conduct after both clubs admitted breaching FA Rule E20(a) in relation to their game on 13 January 2016," read an FA statement on Tuesday.

"It was alleged that in or around the 58th minute of the fixture, they failed to ensure their players conducted themselves in an orderly fashion."