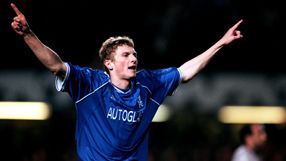 The Spain forward, who cost a British record fee of 50 million pounds when he left Liverpool in January, has yet to get off the mark in six appearances for Chelsea.

Flo, however, believes it is simply a question of time before Torres silences his critics.

"I like his style, the way he runs straight at goal," the 6ft 4in Norwegian told Reuters in an interview. "He really goes for it, he's got great skill and has a great shot too and that's what you need as a striker.

"There is a lot of pressure when you go to a new club and it takes a little bit of time to get used to the surroundings but I think he will score his first goal very soon and then go on to do well in exactly the same way he did at Liverpool."

Flo, who coaches youngsters at his academy just outside London and is due to open another football school near Oslo in June, saw encouraging signs in substitute Torres's cameo display in the 0-0 Champions League draw with FC Copenhagen on Wednesday.

"I think that was his best performance for Chelsea so far," said the 37-year-old. "He looked really impressive and I'm so, so sure that given a bit of time... he will get back among the goals.

"When he gets a goal I'm sure he will start to relax. Even now I think he's doing great because I like his skills and his movement.

"He has been unfortunate not to score. Even yesterday when he came on he looked really dangerous and went close a few times."

Flo, who struck 23 goals in 76 appearances for his country, is recognised as one of Chelsea's best value for money signings.

He joined the Londoners from Brann Bergen for 300,000 pounds in August 1997 and left for Rangers three years later for a fee of 12 million pounds.

Flo, like Torres, had to fight hard for a starting place at Chelsea against three other top-class strikers in Gianfranco Zola, Mark Hughes and Gianluca Vialli.

Torres is competing with Didier Drogba, Nicolas Anelka and Salomon Kalou and Flo believes manager Carlo Ancelotti's rotation system will ensure all the forwards are fit and raring to go as they push for Premier League and Champions League glory at the end of the season.

"It was very similar when I played for Chelsea," said the blond Norwegian. "We had lots of good strikers when I was at the club too but it's the manager's job to figure out the best way to accommodate everyone.

"They managed to keep us all happy. Obviously you are not happy the moment you realise you have been put on the bench but then you also know it means the next time you'll be back in the team.

"With all the hard matches we had to play one after the other and, it's the same for these guys now, you know it's really tough on your body and it's good to be fresh," said Flo who chalked up 50 goals in three seasons for Chelsea.

"When you sit back and think about it you appreciate the fact you get a little rest now and then."

Being left out also acted as an extra spur for Flo, who had a 'super-sub' rep