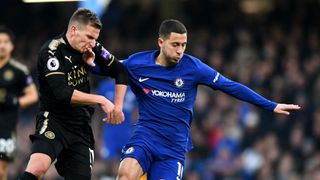 Chelsea's stuttering form in front of goal continued against Leicester City on Saturday and made a piece of unwanted history for the Blues.

With a goalless draw against the Foxes, who played the last 22 minutes with 10 men following Ben Chilwell's second yellow card at Stamford Bridge, Chelsea were held 0-0 for the third successive match in all competitions for the first time.

Antonio Conte's side were unable to develop any momentum as the visitors put on a fine display of high pressing to disrupt the champions.

Eden Hazard was starved of service and endured a quiet outing before being replaced in the 58th minute, while Alvaro Morata's dip in form showed no signs of ending as he failed to register a single shot on goal.

The Blues – who could slip behind Liverpool and into fourth on Sunday – will hope to get back on track in their FA Cup third-round replay at home to second-tier Norwich City on Wednesday.

3 - Chelsea have drawn three consecutive games 0-0 in all competitions for the first time in their history. Blank.January 13, 2018