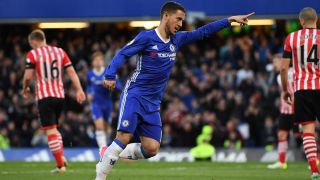 Ruud Gullit has urged Chelsea to snub Real Madrid's approaches for Eden Hazard and keep the star attacker in the Premier League.

Although he is contracted until 2020, the Belgium international is consistently linked to Madrid.

Dutch great Gullit, a former Chelsea manager, said it would be huge if the club managed to hold onto Hazard.

"The difference is that England has the best coaches but the best players are in Spain," he said, via the Daily Mail.

"The best, the Ronaldos and the Messis, play in Spain. And those players decide what will happen in a game.

"What are the rumours now about Hazard? If Chelsea could keep him, it would be massive. But if Real Madrid is calling, what would you do? You have to keep him. You need the world-class player. The individual players, they still make the difference.

"You see it in the Premier League with Alexis Sanchez with Arsenal, with Harry Kane and Dele Alli with Tottenham, you see it with Chelsea with Hazard.

"Individual players make the difference and that is good for sport because that is why people want to go for matches. That's what we pay for. We want to see the individual. So you make the tactics so that individual play can flourish."

Ahead of Sunday's final day of the Premier League season, Chelsea are seven points clear after winning 29 of 37 games.

Conte's men are also in the FA Cup final, facing Arsenal on Saturday as they eye a double.