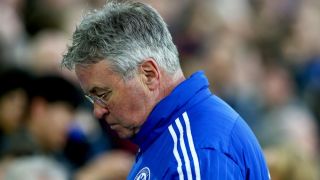 Guus Hiddink says Chelsea cannot accept being out of the Premier League's top four after seeing his team outplayed in a 3-0 loss to Manchester City at Stamford Bridge.

A Sergio Aguero hat-trick settled the encounter in City's favour on Saturday, leaving Chelsea 10th, with five matches remaining in what has been a hugely disappointing campaign for last season's champions.

And the Italian, who coached Juventus to three successive Serie A titles before taking over his country's national team, will be expected to orchestrate a considerable improvement next term.

"Chelsea are in a difficult situation this season," Hiddink was quoted as saying by the BBC.

"We managed to get out of the relegation zone but Chelsea need to be in the first four places.

"We were knocking on the door but we didn't create open chances. They [City] outplayed us ... the fans have had a very disappointing season.

"We've got out of [being] near the relegation zone in a relatively short period of time.

"I told the boys you cannot let it slip away. Man City, you have to recognise they are having a very good season."

Asked about City's form ahead of their Champions League semi-final with Real Madrid, Hiddink added: "Man City are a rather strong opponent and have a lot experience playing in semis and finals. To win silverware you have to be in very good shape in April."