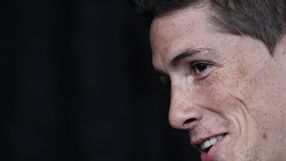 After the Premier League rivals agreed a fee earlier on the final day of the January transfer window the deal was completed at Stamford Bridge shortly before the 23:00 GMT deadline.

"Chelsea Football Club is delighted to announce the signing of Fernando Torres on a five-and-a-half year contract," a statement on Chelsea's website said, without disclosing the fee.

After completing a medical at Stamford Bridge, World Cup winner Torres said he was looking forward to showing his best for last season's double winners.

"I am very happy with my transfer to Chelsea and I am looking forward very much to helping my new team-mates this season and for many years to come," Torres said.

"Having played against Chelsea many times since coming to England, and in some very big games I will never forget, I know there are many great players here and I will work hard to win a place in the team. I hope I can score some important goals for the supporters to enjoy this season."

Liverpool rejected a bid from the Premier League champions last week but, having sealed a 26.5 million-pound deal for Uruguay striker Luis Suarez who completed his move from Ajax on Monday along with Newcastle's Andy Carroll, for a reported 35 million pounds, they agreed to sell the 26-year-old Torres.

The Spain forward joined the Anfield club from Atletico Madrid for around 26 million pounds in 2007, quickly establishing himself as a Kop hero.

During his time at Anfield, Torres scored 81 goals in 142 games in all competitions, although his form has been patchy during this season as Liverpool languished in the lower reaches of the Premier League.

Chelsea had not made any major signings throughout the month but buying Torres and Luiz is a real statement that the club, owned by Russian billionaire Roman Abramovich, remain big hitters in the market.

"This is a very significant day for Chelsea, capturing one of the best players in the world with his peak years ahead of him," chairman Bruce Buck said in a statement.

"We have long admired the talents of a player who is a proven goalscorer in English football and Fernando's arrival is a sign of our continuing high ambitious. I hope every Chelsea fan is as excited as I am with this news."