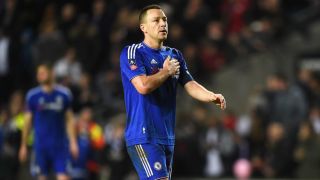 The former England captain has not played since the 2-2 draw with West Ham in March due to Achilles and hamstring injuries.

But he is due to play a part in Monday's London derby and could line-up alongside fellow returnee Gary Cahill.

Chelsea interim manager Guus Hiddink told a news conference on Friday: "They have both participated in this week's training. They are okay to come into the first 18.

"It's good to have them back, because John was out for a longer period because of injury. Gary a little bit the same."

Chelsea have endured a disappointing season but possess a proud record against Spurs, having not lost to their London rivals at Stamford Bridge since 1990.

Hiddink added: "Chelsea have always been strong in the past at Stamford Bridge and I hope we can continue it.

"We want to continue that [even though] I am not a man of statistics."

Spurs' title challenge could be over by Monday with Leicester City able to clinch the trophy with a win at Manchester United the day before.

Although they are likely to fall short, Hiddink remains a fan of Tottenham's approach this season under Mauricio Pochettino.

"They have a large squad and have had a good season. I respect the work Pochettino is doing, and it shows in the team," he said.

"I see them play in the way you would like a team to play - which is attractive. He [Pochettino] is doing a very good job there.

"The squad is strong. Even when [the suspended] Dele Alli is not playing his replacement will try to do a strong job as well.

"They are defensively well organised, and have a strong urge to attack with their full-back, midfield, attack."